I love reading rags to riches stories – who doesn’t. That’s the reason why I love attending graduations. More often than not, one alumni of that school is the guest speaker, along with politicians of course. Especially if it’s election time, haha.

Having said that, let me share the story of one person that I just recently read. I was searching why Manny Pangilinan was not part of the richest Filipinos of 2012 when I happen to read his graduation speech. I was so awed by his story that I can’t help it but share it here for you to read. I was truly inspired so I hope it will have the same effect for you.

Here’s the graduation speech of Manny Pangilinan given at the Ateneo De Manila University Class of 2006 (not the controversial one 😀 ).

First part of the journey: A Student

The first part of my journey begins with my family. My lolo (grandfather) started as a public school teacher in Pampanga and Tarlac, rising through the ranks to become superintendent of public schools and, eventually, secretary of education. My dad began his career as a messenger at Philippine National Bank, and retired as president of Traders Royal Bank, one of the larger banks in the ’80s.

During my elementary years, I had ten centavos to buy a bottle of Coke, five centavos for crackers, another ten centavos to take the bus home from San Beda in Mendiola, which I made sure I wouldn’t lose, otherwise I would have walked home. In college, my weekly allowance at the Ateneo was P10, and that included my jeepney fares. I have a lot of classmates who have cars and others even have their own drivers. They were lucky. Someday, I said to myself, I will reach all those. My scholarships in both San Beda and Ateneo were only my lucky charms.

In late 1965, as my own graduation was approaching, I had come home from the Ateneo one Saturday afternoon, and spoke with my dad about taking an MBA in the States. I was met with silence, which meant there wasn’t enough money for an education abroad, that if I really wanted it, I had find a way myself. Fortunately, Procter & Gamble was offering a rare scholarship to the University of Pennsylvania’s Wharton School. It was a national competition. I entered-and won. For three generations of my family, life meant coping with challenges despite modest means, relying on God-given talent, hard work and a passionate determination to succeed.

Second part of the journey: A professional manager

Let me now turn to the second part of this journey. After two years in Philadelphia, I returned home, hopeful about landing a managerial position in a large company. I struck out at first bat. My benefactor, Procter & Gamble, turned down my application. So I ended up taking the first job I was offered, as executive assistant to the president at Phinma for P1,000 a month. Without any job experience, we can’t be choosers, right? Grab the first decent job that comes your way, immerse yourself in work, and soon, you’ll find the right job, or it will find you.

After six years with Phinma, I decided to work abroad. There were the usual reasons: the glamor of being an expat in Hong Kong, the stifling staleness of my local career but, more importantly, I needed to find myself, to prove that I can stand on my own and succeed. The warmth of family ties, the comfort of an extended family system so embedded in our society were indeed beguiling, but I wanted to assert my independence.

I was recruited by Bancom International, a Philippine investment bank based in Hong Kong. It was a stimulating experience. I learned the dynamics of international finance from my Chinese colleagues, not from the Filipino executives. Thereafter, I was seconded to a joint venture investment bank with American Express.

I had expected to be appointed CEO of that new bank, but wasn’t. While disappointed and even depressed, I soldiered on and, sure enough, this venture failed inside of two years. A huge dilemma confronted a young man of 30 years: return to Manila or stay with AMEX? I decided to remain a soldier of fortune in Hong Kong. Why? Because after this setback, I wanted to prove something to myself. I felt I had to prove to AMEX the Filipino can. Indeed, after four years with AMEX, I received a phone call from my boss in London. He said, “You’ve outgrown Hong Kong and are now ready for London, and to fast track your career.” After reflection, I politely said, no. I’ve proven the point to myself and to AMEX, and that had been enough. Besides, I felt Asia is my home — and so it shall be.

The third, and final part, starts with First Pacific.

Whilst working in the region, I met some clients – foremost being Anthoni Salim – who were willing to support my idea of a regional banking and trading business. With their help, I founded First Pacific in Hong Kong in 1981. I started out with only six people, on 50 square meters of office space, and little capital. Now, the companies that constitute First Pacific have sales of $5 billion, with more than 60,000 employees across the region. But I won’t tell you about our successes at First Pacific. Instead, I’ll describe our failures – some of which indeed became total failures, but some of which we turned around and made a success.

[ad#content300] In 1989, we were negotiating to acquire Hanimax, maker of middle to low-end cameras based in Sydney, Australia. I took the overnight flight to Sydney from Hong Kong, confident that when I arrived the following morning, a letter from an international bank approving our financing would await me. But lo and behold, it was a letter of disapproval. So there I was in Sydney, committed to purchase Hanimax, but without enough money to complete it. Providentially, there was a competing bidder who sought to take us out of the race by offering a sum of money. That practice is called “greenmail.”

Our gambit won $7 million that day when we had no cards to play. But there’s a sequel to this. Buoyed by confidence – perhaps overconfidence, even hubris – we were off to the races again, and decided quickly to buy another company. This was Tech Pacific, Australia’s largest distributor of computer products. It was indeed a large company with sales in excess of a billion dollars! Well, it was a disaster. It took us three years, and enormous pain and effort, to turn its fortunes around. I fell sick from stress and anxiety and, on several occasions, contemplated resigning. But we stood to our tackle and, after those three years, Tech Pacific is now Asia’s largest distributor of computer products.

In 1998, I came home, after 22 years abroad – after what father (Roque) Ferriols often calls “the days of wasted youth.” When we invested in PLDT seven years ago, we faced the massive task of repair and renewal. Critics told us that we couldn’t change the culture of monopoly, that misdemeanors in PLDT couldn’t be eradicated, that our fixed line business had no future. But we made the tough and unpopular decisions at PLDT. Like reducing the number of employees from 14,000 to 9,000. Like changing dubious practices and encouraging honesty and transparency. Like converting the mindset of bureaucrats to that of innovators and entrepreneurs. Decisions about people are always difficult for us because First Pacific is an Asian company with Asian values. But head count reduction was critical for PLDT to survive.

Now that PLDT has recovered, and is now the most profitable company in the country, my confidence in the Filipino’s ability to succeed has been absolutely affirmed. In fact, despite the downsizing I mentioned earlier, we now have more people under our wings – about 19,000 – simply because PLDT is now a different company. And to most of you who might be familiar with Piltel or Talk N’ Text – it was a company in extremis. I’ve had to tell creditor banks that Piltel could not pay its debts – the first time I’ve done that in my life. My officemates told me to close Piltel. I didn’t agree. I believed that the cellular frequency it owns, as well as its brand, are potentially valuable, as they have become today. Also, I did not want to imperil the financial health of local banks to which Piltel owed much.

After five years of rehab, Piltel’s return to profitability has been close to supernatural. It is now the country’s most profitable company – after PLDT and Smart. Finally, some of you have raised with me the question – is business bad? Let me respond by saying, business is not all bad. It is people – some people at least – that may make business bad. No business can prosper in the long term without the right values. The best performing companies are those that manage their businesses which meet ethical standards. Transparency, accountability, integrity, discipline – all these good governance principles – must permeate every policy, every process, of the company, as they do at First Pacific and PLDT.

Thefore, I close, I’d like to make a personal request. I’d like to ask each of you a favor. Give me bragging rights. Do something great. Sometime in the future, I want to hear some incredible thing you’ve done. And I’d like to brag that I spoke at your graduation.

In return, I offer you a few more pieces of advice. Keep it real. Stay true to what’s best in yourself, to the best of your experience here at the Ateneo. Trust your instincts. Believe in yourself. Engage in sports, you’ll need it as you age. Make art, or at least, value it. Be brave. Be bold. Find something that moves you or pisses you off, but do something about it. You have a voice, speak up.Take a stand for what’s right. Make a change. You may not always be popular, but you’ll be part of something larger and greater than yourself. Besides, making history is cool, isn’t it? But I also want to offer a warning: you will meet people who’ll entice you to compromise your principles. They’ll try to seduce you and distract you with money, power, security and perhaps, most dangerously, a sense of belonging. Don’t let them; it’s not worth it.You can have genuine values and still get that job. You can have a conscience and still make money. 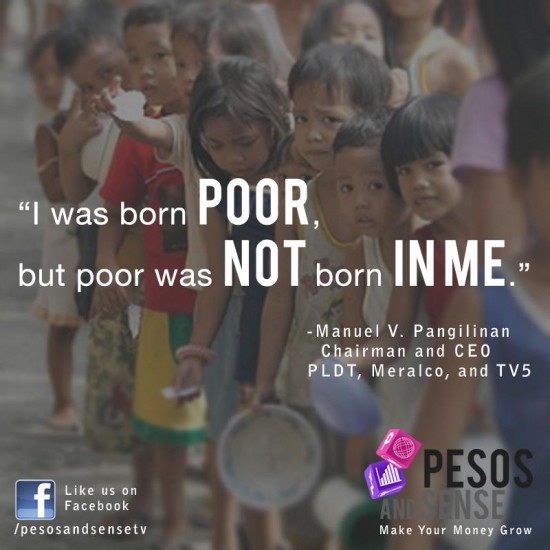 Let me send you off with one final thought. I was born poor, but poor was not born in me. And it shouldn’t be born in you either. You can make it. Whatever you may wish to do with your future, you can make it. It gets dark sometimes, but morning comes always. Suffering breeds character. Character breeds faith. In the end, faith will not disappoint. You must not disappoint.

Truly, the quote of Bill Gates that “If you are born poor, it’s not your fault. But if you die poor, it’s your fault” is very true indeed. 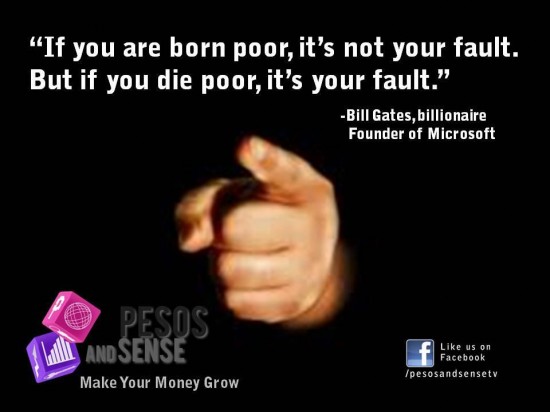 How bout you, have you made that investment move already? If not, I suggest you start planning and doing it as soon as you can. Like them, let’s all die rich. 😀