Ever wondered why Sylvester Stallone have this blurry speech? I never cared until recently when I made a search on his biography. Let me tell you why.

Last Good Friday, we (Jacob and Aileen) were in Bulacan at my parent’s house. I was looking at my Conie’s (my sister) movie collection and copied some of the old movies I haven’t watched or watched but wanted to re-live the story.

My youngest sister (AJ) saw that I was copying Rocky Series and exclaimed “Naku ang tagal nyan. Rocky palang dami na.” Then I told her, did you know that the story was a Rags to Riches story? She asked “Alin, yung boksingero sya?” 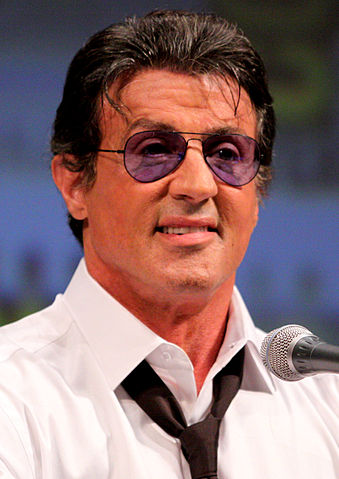 I then told her the whole and brief story of Sylvester Stallone and how Rocky Movie came to be. My wife Aileen, Conie, AJ and even Kuya were all listening intensively so I thought why not share it here in Financial Planning Philippines. By the way, I too never cared about Sylvester Stallone before not until I read it from Bo Sanchez’ Truly Rich Club (which I’m a member since 2010).

Stallone attended school in suburban Philadelphia where he first started acting. He then spent two years instructing at the American college of Switzerland in Geneva. When he arrived back in the United States he became a drama major at the University of Miami where he also began to write.

He left college before graduation and moved to New York to pursue his acting career. He auditioned for almost every casting agent in town with no success. He decided to turn more towards writing and wrote many screenplays while waiting for his acting career to blossom.

In 1974 he got a break as one of the leads in “The Lords of Flatbush”. He also received his first writing credit for additional dialogue on this film.

Despite this small break he struggled to build momentum. He kept auditioning with one rejection after the next. He started writing more screenplays and received similar rejection.

Stallone had run out of money and was living in a desperate situation. He could barely even feed his family. Then one day he was walking through the streets of New York and he wandered into the library to keep warm. This became a regular habit for him during the colder months.

During his time at the library he began reading books from writers such as Tolstoy and Edgar Allan Poe. This gave him a bit of an extra edge in his writing endeavours and so he pursued this more and more.

By this stage he was desperate to get work but he wouldn’t take an average job, he knew his outcome, he wanted to be an actor and that was it.

He resorted to many regrettable things like hocking his wife’s jewellery. I mean seriously, there are some things you should never do, you could get killed for something like that ha ha.

One day Stallone was sitting at home watching a fight between Weppner and Ali. Weppner was getting absolutely slaughtered but kept holding his ground and coming back for more. This underdog was really fighting for it despite the slim chance he would even get close to winning.

This inspired Stallone to begin writing based on his inspiration from this fighter. He wrote for over 24 hours straight and after this time he had written the entire script to Rocky.

He began trying to sell the screenplay to many producers with enormous numbers of rejections. This went on for months.

He was so poor by this time that he decided he had to sell his best friend, his dog. Stallone waited outside of a local liquor store asking people if they would buy his dog. Eventually someone bought the dog for around $50. He was devastated to have to do this.

He kept pursuing this story that he had written. Eventually someone loved it and they agreed to do the movie. He was wrapped and told them that he wanted to play the part of Rocky.

They declined and told him he was a writer not an actor. Stallone disagreed and told them he was an actor. He declined there offer of over $100 000 despite his current poverty.

A couple of weeks later they contacted him with an even higher offer and Stallone still insisted that he play Rocky. The once again declined. Was he nuts? I mean the man was poor, he could barely even eat.

The offer kept rising just so he would sell them the film without playing the part. The price eventually got to around $400 000 and still he declined. He was certain that he was actor and that was it, there was no compromise.

Eventually they offered Stallone a measly $25000 so they weren’t throwing their money away by having him as the lead role. He accepted. Then the first thing he did was go back to the liquor store to buy back his dog.

He waited 3 days for the guy to come by and finally there he was with his dog. He offered the guy $150 to buy back the dog, the man declined. The offer kept rising, but again, Stallone knew his outcome and kept pursuing his goal.

It ended up costing him $15000 and a part in the movie to buy back his dog. The guy and the dog are in Rocky.

Of course we all know what happened with the Rocky movie. It won Academy Award for best picture in 1976. At the awards ceremony he read out all the rejection slips from those who said the film would be sappy, predictable and a film that no one would want to watch.

And why the blurred speech? Here’s why

Complications his mother suffered during labor forced her obstetricians to use two pairs of forceps during his birth; misuse of these accidentally severed a nerve and caused paralysis in parts of Stallone’s face. As a result, the lower left side of his face is paralyzed – including parts of his lip, tongue, and chin – an accident which has given Stallone his snarling look and slightly slurred speech.

Learning from the Sylvester Stallone Story

When I read this rags to riches story of Sylvester Stallone, I was awed.  Hard work and perseverance will surely pay off. You just have to sharpen and master your craft as you go along and one day you will reap all its rewards.

It kinda remind me of one of my favorite Bible verses –

Matthew 7:7 – “Ask and it will be given to you; seek and you will find; knock and the door will be opened to you.