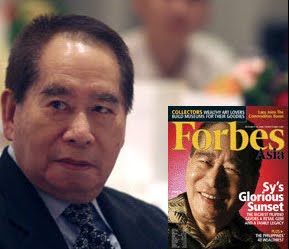 But anyway, here’s the Top 40 Richest Filipinos of 2012 according to Forbes Magazine. Still leading the pack is no other than lolo Henry Sy (haha) of SM Prime with $9.1 Billion. Followed by uncle Lucio Tan ($4.5Billion) and surprisingly, it is Enrique Razon, Jr. ($3.6Billion) on the 3rd spot followed by John Gokongwei, Jr. ($3.2Billion) with David Consunji ($2.7Billion) at the 5th spot.

Below is the complete list of Philippines Richest Filipinos of 2012.

Top Life Insurance Companies in the Philippines for 2011

[ad#content300] How bout Joseph Calata? Still not on the list eventhough Joseph Calata is the youngest Filipino billionaire (I only assume), he’s still way below from the last person which is around P6Billion pesos.

And the biggest question, why Manny Pangilinan (MVP) and Ramon Ang (RSA), who are both very known in the business community are not on the richest list? I was also intrigued. Further searching on the net and I found this on Inquirer.

The common explanation for the absence of “RSA” and “MVP”—as both men are known in the business community—from the Forbes list year in and year out is the fact that both men, as heads of their respective conglomerates, are “mere employees.”

But interviews made by the Inquirer with business associates and longtime observers of the dynamics of Philippine business reveal that the absence of both corporate titans, indeed, exposes one of the biggest weaknesses of the celebrated roster.

“Mere employees? Nothing can be further than the truth,” said one businessman familiar with the corporate structures of Ang’s San Miguel Corp. and Pangilinan’s PLDT group.

“For the list to be accurate, they should be high on the Top 40 list of Filipino billionaires,” said the businessman, requesting anonymity. “Very high.”

He explained that both Ang and Pangilinan had, in fact, “very creative methods” of keeping their wealth from public view, including structuring their ownership in various corporations through several layers of ownership in holding companies.

“If you were to pierce the veil of ownership in the various firms they work for, you will find that they actually have bigger stakes than what people think,” he said. “It’s not illegal, just creative.”